What happened to Karin Olofsdotter Ros (Winnberg) from Sweden? Does anyone know?

Her life began in Borr in the parish of Ljusdal, Hälsingland, Sweden.
Date of birth 12th June 1862. Mother: Kerstin Larsdotter Ros. Father: Unknown (illegitimate child).
Karin also had a brother, Erik, who was born 3rd March 1870. Also an illegitimate child but he will have the surname Winnberg in the ages between 1871–1880. Erik went to America in 1889.

We found out that Karin left Sweden for America 4th March 1887. The journey started in Göteborg (Gothenburg) and the name of the ship was Orlando. From there Karin first got to Hull in England and from there she maybe have taken another ship or a train to get to another harbour to travel on to America. Minneapolis is probably the first destination for Karin in the new country. She wasn´t alone. Together with her there are three more people as follows. Please note the spelling of Karins name.

Anna and Frans gets married. Carl E Lindstrand is Annas halfbrother.
But what happened to Karin/Carin? Why has she taken the surname Winberg? Does she have the same father as Erik? We suspect that the father was constable Johan Gustaf Winnberg. The reason for that is that in his estate inventory he owed money to Kerstin (a maid), the mother of Karin and Erik. Johan Gustaf Winnberg died 1879. Maybe Karin added Winberg to change her identity or make it easier for her brother Erik to find her when he made the journey over to America two years later.

Also Anna and Karin/Carin had some things in similar. They were both illegitimate children which must have been hard in those days. If that wasn´t enough they were both sent to prison because of murdering their own children when they were born.

We are now searching for descendants of Karin Olsdotter Ros (Winnberg) or anyone else who have information about her and her family. We would be very grateful and also the descendants of her brother Erik as they also whish to know what happened to her. 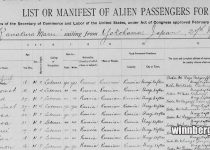